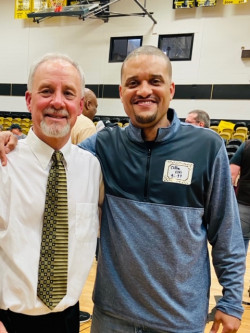 Temple College Athletic Director Craig McMurtry has announced that Johnson’s replacement will be Clifton Ellis, who played under Johnson from 1995-1997 and has been coaching high school basketball for the past 20 years.

A graduate of Roosevelt High School in San Antonio, Ellis played point guard for the Leopards and was both an All-Conference and All-Region selection.

After playing at Temple College, Ellis went on to play at Texas State University in San Marcos, where he served as captain of the team his senior year and led the team in assists. He earned a BA in kinesiology/education from Texas State in 2000.

Ellis has coached high school basketball in the San Antonio area since 2000. He started as an assistant coach at South San Antonio High School and was named associate coach at Converse Judson High School the following year. He landed his first head coaching job in 2005 at Karen Wagner High School. In the six seasons he was there, his team won four district championships, made three appearances in the regional tournament and won two regional tournaments that allowed them to advance to the Texas State Tournament Final Four. His team was ranked in the ESPN top 50 from 2008-2010 and had numerous players sign at various levels of college basketball. Two of his former players are now playing in the National Basketball Association – Andre Roberson (Oklahoma City Thunder) and Jordan Clarkson (Utah Jazz).

Since 2012, Ellis has served as head boys basketball coach at Samuel Clemens High School in Schertz, Texas. He was hired there to turn around a program that won only seven games the year before. Since Ellis took over the program, the varsity team has won three consecutive district championships and made consecutive appearances in the Texas State Tournament Final Four for the first time in the school’s history.

In addition to his coaching duties, Ellis teaches world history, government and economics. He earned a master’s degree in education administration from Texas A&M University - San Antonio in 2010 and is currently working on his doctorate of educational leadership in sports management/administration at Concordia University - Chicago.

Ellis was a founding member and later president of the San Antonio Area Basketball Coaches Association, which was established to give local coaches a unified voice in growing the game of basketball in the San Antonio area. He helped establish an annual clinic to bring coaches together from the club, high school, college, professional, and international level to create ideas and share coaching techniques to further promote quality basketball in San Antonio.

From 2012 to 2015, Ellis served as a board member and South Texas regional coordinator for the Texas Association of Basketball Coaches, the largest state basketball organization in the United States.

Since 2015, Ellis has served as United States Regional Director for The Basketball Embassy, a non-profit organization based in San Antonio that works in basketball diplomacy around the world. His work with this organization includes directing camps, leading coaching clinics, meeting with officials from the U.S. State Department and foreign leaders. The organization has worked with basketball federations throughout Eastern Europe, Asia, and with FIBA Europe to break down cultural, national, and religious barriers through sport. It also works with local school districts to help with youth basketball development. In San Antonio, the organization has provided free weekly basketball camps for children living in a homeless shelter.

Kirby Johnson retired in February after coaching the men’s basketball team at Temple College for 33 seasons. Athletic Director Craig McMurtry said Ellis was selected out of more than 100 applicants for Johnson’s position.

“What really stood out about Clifton first and foremost was the fact that he had ties to Temple College as a very successful player which means he is very familiar with the college and the basketball program,” McMurtry said. “He also has experience and success as a high school coach of 20 years in Texas. Through his connections with Texas high school coaches he will be able to recruit quality student-athletes and we felt he could come here to Temple College and continue the strong winning tradition that Coach Johnson has established.”

Ellis said Johnson had a tremendous impact on him both as a student-athlete and ultimately as a person.

“He was one of my biggest influences as far as my decision to go into coaching,” Ellis said. “The calmness he always displayed gave us confidence as players and it is something I have always tried to model. Many of the lessons he tried to teach us about accountability are something I have truly grown to understand as I have advanced in my coaching career.”

The two have remained in touch over the years and Ellis said Johnson has recruited some of his high school players to attend Temple College.

Ellis said coming back to Temple College is something he always wanted to do.

“I have always thought of the small-college experience as one of the best experiences a student-athlete can have,” he said. “My two-year experience at Temple College was something I always valued and cherished and the chance to play a role and share in other student-athletes having those experiences was a challenge I wanted to work at.”

Ellis said he and his wife are looking forward to moving to the Temple area. The couple has two sons, ages 8 and 10.