The new University of Texas Dell Medical School had 4,528 applicants for 50 spots in its inaugural class. Among the students selected for one of those coveted spots was Ian Collier, a 2012 graduate of Shoemaker High School in Killeen.

Collier credits his acceptance into the new medical school with his participation in the Texas Bioscience Institute (TBI), which is run by Temple College. In particular, Collier credits the opportunity to do summer research with Dr. Nandini Nair, the former medical director of cardiac transplantation at Baylor Scott & White Hospital.

“My research hours and mentorship with Dr. Nair really helped set me apart in applying to medical school,” Collier says.

After completing the TBI program, Collier went on to The University of Texas, and recently graduated with a double major in biology and biochemistry.

Seventy-four graduating high school seniors earned the opportunity to participate in the 2016 Silver Cording Ceremony, which recognizes completion of the TBI Middle College program.Collier is one of more than 500 students who have taken advantage of programs offered by the Texas Bioscience Institute, which is celebrating its 10th anniversary this year. The program Collier completed is called the Middle College program, which enables high school students to earn an associate degree while they are still in high school.

The institute is located in the sprawling Scott & White west campus, which is the former site of a Texas Instruments manufacturing facility. Scott & White pushed for the creation of TBI to help it develop a workforce for its research labs and retrain workers whose skills had become outdated. The facility is now full of state-of-the-art laboratories and classrooms that support advanced courses in biology, chemistry, math and biotechnology. Students participating in TBI can just walk down the hall and find themselves in the labs of some of the country’s leading bioscience researchers, who are also housed on the campus.

Forty students were in the inaugural Middle College class, which started in the fall of 2006. Among those students was Adam Kohl, who was a junior at Academy High School at the time.

“I can’t believe it has been almost 10 years!” Kohl says. “It definitely doesn’t feel like it was that long ago that I was there at the Bioscience Institute in the first class.”

After graduating from Academy High School in 2008, Kohl went to The University of Texas at San Antonio and earned a bachelor’s degree in biology with a concentration in microbiology/immunology. He then returned to Temple to work in the microbiology lab at Baylor Scott & White until 2014. He recently completed a master of science degree in cardiovascular sciences from Midwestern University in Phoenix, Ariz., and is now working as a cardiopulmonary perfusionist for the University of Louisville Physicians Group in Louisville, Kentucky.

“Being accepted into the Bioscience Institute and taking more advanced science classes during high school was a great benefit to me,” Kohl said. “They allowed me to get a head start on my medical career, not only by getting more knowledge early on, but also getting college-level credit for it at the same time. I am very grateful to all of the people who made the Bioscience Institute possible and for all the professors who taught classes there.”

“Students and parents are happy with the results of the program,” Griffith says. 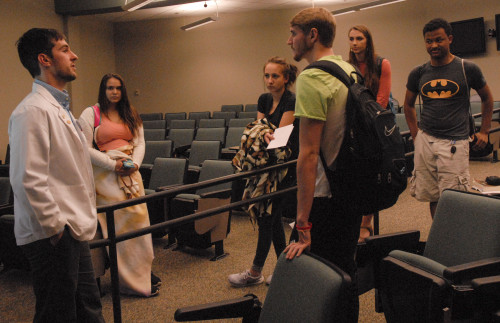 Mason Sanders, a former TBI student who now attends the Texas A&M College of Medicine, speaks with current participants in the TBI Middle College program.Several times each semester, Griffith lines up guest speakers to talk with the high school students about career opportunities. Some of these speakers are TBI alumni themselves. One such speaker this spring was Mason Sanders, a 2010 TBI graduate who just finished his second year at the Texas A&M College of Medicine. Sanders applied for Early Decision at Rice University and attributes his admission to the perspective and experiences he had at TBI.

“My classes here prepared me very well for college,” Sanders told the Middle College students. Sanders was also in the first group of TBI students who did summer research projects.

This summer, 16 students are conducting research with mentors from Baylor Scott & White, Texas A&M College of Medicine, Texas A&M University-Central Texas, and the University of Mary Hardin-Baylor. The students will present their research Aug. 9 at an event that is open to the public. 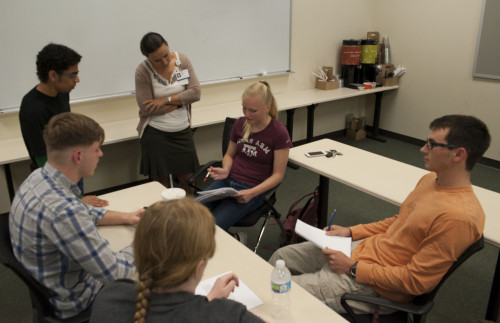 Students participating in the TBI 2016 summer research internship program discuss their projects with Dr. Jennifer Stone from Baylor Scott & White Hospital.Brittany Vrooman, a current TBI student from Salado High School, hopes her research experience this summer will help her obtain her dream of attending medical school. She is working on an ovarian cancer research project with Dr. Nasir Uddin, an assistant professor of obstetrics and gynecology at the Texas A&M College of Medicine.

“The research project is helping me figure out if I want to do more research or clinical work,” Vrooman says.

Whichever path she chooses, Vroman says she is delighted to have the opportunity to earn her associate degree while she is still in high school.

“Since I am going to be in school for at least another eight years, I want to get an early start,” she says.