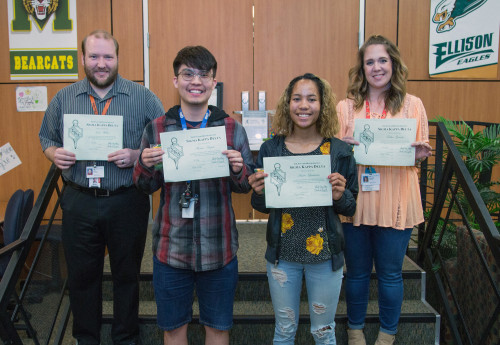 English faculty members Nick Kocurek (left) and Esther Guenat (right) stand with Martin Angulo and Amira Lambertis, who are among the first student members of the new English honor society, Sigma Kappa Delta.Temple College has received a charter to have a chapter of Sigma Kappa Delta, the English honor society for two-year colleges. Seven faculty members and five students have been inducted into the chapter as founding members.

Sigma Kappa Delta was founded in 1996 at Cottey College in Nevada. Its goals are to:​

To be eligible for membership in Sigma Kappa Delta, students must have completed one semester of college and at least one college English course, have no grade lower than a B in English, and have a minimum grade point average of 3.0.

Dr. Christopher Krejci, an assistant professor of English who is one of the group’s four faculty co-sponsors, said faculty members in the English Department began discussing the possibility of establishing a chapter of Sigma Kappa Delta at Temple College more than a year ago as a way to foster community, extend learning beyond the classroom, reward students for academic success, and get students excited about literature, language and writing. 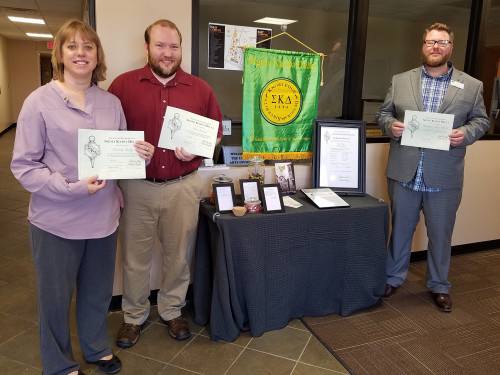 Krejci said student members will be eligible for scholarships and awards and will have the opportunity to represent Temple College at state, regional and national conventions.

The Temple College is the 134th two-year college to have a chapter of Sigma Kappa Delta. Its chapter, which was formally chartered on March 6, 2018, is known as the Nu Zeta chapter.

Three initiation celebrations are planned in April to welcome the new members and present them with their pins signifying membership in the society. The chapter’s charter will be framed and displayed in the English Department offices.