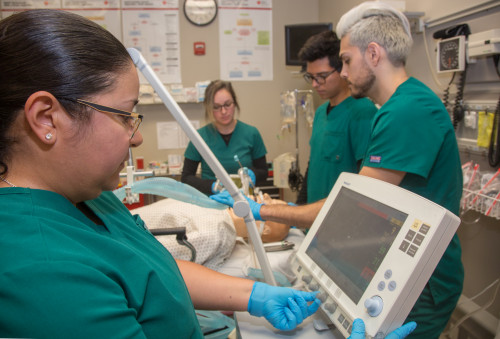 After the school she originally attended closed, Nancy Rangel came to Temple College to complete her respiratory care degree. She will be graduating at the top of her class in December 2019.Nancy Rangel was six months away from completing her training to become a respiratory therapist when she heard the devastating news: the school she was attending was going to close.

“I still remember that day like it was yesterday,” Rangel says. “I had fallen love with this field. For it to just get stripped away was really hard.”

Rangel had been studying respiratory care at Virginia College, a for-profit school in Austin that closed in December 2018. Classes taken at for-profit schools do not usually transfer to other schools.

“I didn’t think anyone would take us in,” Rangel said. “I thought I was going to have to start all over.”

Fortunately for Rangel and four of her fellow Virginia College students, their instructor got in touch with Temple College to see if the college could do anything for them. Dr. Bill Cornelius, who was head of the Respiratory Care program at the time, said he would try to work with them.

“I was so excited,” Rangel said. “I had an opportunity many students probably didn’t have.”

Dr. Shelley Pearson, associate vice president for health professions, said trying to enroll the students from Virginia College was “the most complicated thing we have ever done.”

“When we asked the (Texas Higher Education) Coordinating Board what we needed to do they said ‘Just do your best’,” Pearson said. “There was no model for this.”

Pearson said representatives from Advising, Biology, eLearning, Financial Aid, the Temple College Foundation and many other departments all had to work together.

“It was a true example of teamwork,” Pearson said.

Rangel and her classmates started at Temple College in January 2019. In December, she will be graduating at the top of her class.

“I am very grateful,” Rangel said. “I learned so much from the professors here. I also got the opportunity to be in a lot of different hospitals.”

Rangel did her clinical rotation in the adult critical care unit at the Scott & White Medical Center in Temple, and she said her supervisor there wants to talk with her about a job as soon as she gets her license and credentials.

Pearson said everyone is delighted with how everything worked out for both the students and the college.

“By doing this we have created a model we can use in the future,” she said.

Pearson said four students who had been studying sonography at Virginia College also started at Temple College in fall 2019 and will be graduating in May 2020.