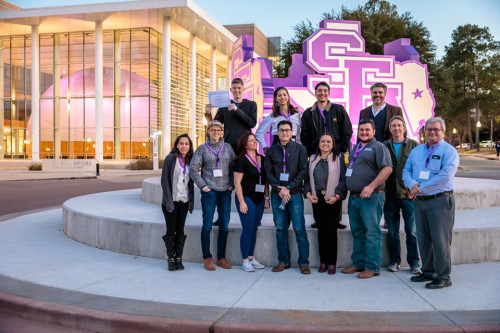 Students Joey Moore and Tyler Wilson presented preliminary results of their research on zebra mussels. They have been conducting the research this year thanks to funding from the Temple Health & Bioscience District.

Moore presented his research project titled “Invasive Zebra Mussel Settlement and Density Comparisons in Two Geographically Close Central Texas Reservoirs.” With help from fellow students Brittany Lokcu and Sam Poster, he has been studying the density of zebra mussel populations in Lake Belton and Stillhouse Hollow Lake under the direction of biology professor Dr. Jason Locklin. Preliminary results from samples they took in fall 2019 suggest that mussel densities are higher at Stillhouse Hollow Lake. Mussels are also denser near the surface at this lake, with little variation in density across depth at Lake Belton. 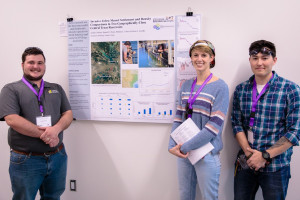 Joey Moore, Brittany Lokcu and Sam Poster stand with their poster on zebra mussel research at the 2020 Texas Academy of Science meeting.“If such differences hold throughout the remainder of the study, an assessment of water quality parameters may shed some insight into the factors governing the population dynamic differences in the two nearby lakes,” Dr. Locklin said.

Moore received an award for the best poster presentation in the Freshwater Sciences Section at the conference. 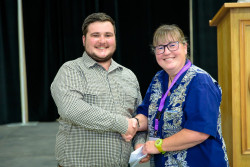 Joey Moore received an award for the best poster presentation in the Freshwater Sciences Section.Wilson presented a paper titled “Examining the Human Element of the Central Texas Zebra Mussel Invasion.” He has been studying the effectiveness of efforts to educate the public about the damage zebra mussels can cause, with a particular focus on visitors to Lake Belton. His research, which was conducted under the direction of Dr. Locklin and biology professor Dr. Phillip Greco, found that the majority of those surveyed were both aware of zebra mussels and the threat that they pose.

Dr. Locklin and Dr. Greco presented a paper titled “Creation of an Undergraduate Community College Research Program.” The two have been instrumental in creation of the new Temple College Biological Research Institute, which was started in 2018 to facilitate research projects for biology students at Temple College. In their presentation, Dr. Locklin and Dr. Greco shared their experience in creating the TCBRI.

Dr. Locklin also presented the results of a 2016-2017 research project conducted by former student Devin Corbitt, which also looked at zebra mussel population dynamics in Lake Belton. He and Corbitt have submitted this project for publication in an international journal called Aquatic Invasions.

In all, 11 students and six biology faculty members attended the 2020 Texas Academy of Science meeting, which was held at Stephen F. Austin University in Nacogdoches.