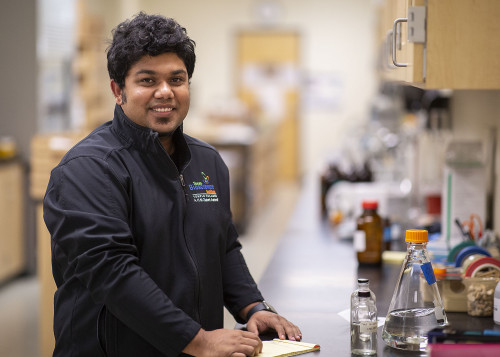 Zuberi AshrafEach year, The University of Texas at Austin receives hundreds of applications for the 25-30 spots it has available in its microbiology Ph.D. program. Those who are accepted receive a full scholarship for the five years it takes to complete the program.

Among those who will be entering the program this fall is A H M Zuberi Ashraf, a 2015 graduate of Temple College.

None of this would have been possible, Ashraf says, had it not been for the solid footing he got as a biotechnology student at Temple College.

“Temple College built my foundation in a flawless way,” Ashraf says. “That foundation is very important in this line of work.”

A native of Bangladesh, Ashraf says he was exploring ways to go to college in the United States when he decided to come to Temple as a high school exchange student.

Fortunately for him, the host family he stayed with (the Fords) had several members who had gone to Temple College. “I would come to the college with them just to see what it was like,” he recalls.

Ashraf learned about the college’s biotechnology program while attending a college fair, and decided to enroll in it.

From the day he entered the program, Ashraf began networking with researchers at other institutions such as Baylor Scott & White who would later help him in his career. Of particular help, he says, was having the opportunity to do an internship with Dr. Nasir Uddin every summer.

Ashraf already has published five peer-reviewed papers and has three other papers under review – an impressive record for an undergraduate.

Before he even completed his undergraduate degree at TAMU-CT, Ashraf had landed a job as a medical laboratory scientist in the Microbiology Lab at Baylor Scott & White Medical Center in Temple. He has been working there in the evenings, helping diagnose infections by analyzing a variety of patient specimens.

In the mornings, Ashraf has been coming back to Temple College to serve as a science lab assistant. In this position, he helps science lab manager Dr. Rachelle Beattie set up experiments for chemistry and biology classes.

Ashraf says this position has helped him hone his laboratory skills and learn critical new skills such as how to handle the hazardous materials that are used in labs.

While working at Baylor Scott & White, Ashraf says he set his sights on becoming a lab director – a position that requires a Ph.D. He was accepted into two microbiology Ph.D. programs this spring and decided to attend the one at UT-Austin.

Even while working two jobs and applying for graduate school, Ashraf agreed to be on the advisory board of new Temple College Alumni and Friends Association.

“While going to Temple College I have made connections that I hold dearly to this day,” Ashraf says. “I believe being a part of our new alumni association will allow me to connect many others back to our wonderful institution where they may have started their college education like myself. Also, being a part of an alumni association will allow me to give back to our new students, something that I strongly believe in − paying it forward as so many have done it for me!”