Theresa Anthony’s father only had a third-grade education and her mother barely passed high school. As a result, Anthony says she never thought seriously about going to college.

“All my parents really cared about was that I graduated from high school so I could get a job and move out on my own,” Anthony says.

Two weeks after she graduated from high school, Anthony turned 18 and her parents did indeed force her to move out on her own.

“It was not easy,” Anthony recalls. “There was a period of time when I slept in my car and took showers wherever I could. I ended up in abusive relationships just to have a roof over my head.”

The hardest part of all this, Anthony says, was that her self-confidence was depleted. “I didn’t think I could do more with my life than simply exist,” she says.

Then life threw Anthony another curveball – she was diagnosed with cancer.

“Nothing puts things into perspective more than the ‘C’ word,” Anthony says. “I began to ask myself ‘What have I done with my life? Have I made a difference in this world?’”

Anthony survived the cancer and says it taught her an important lesson.

“If I could survive something so scary, maybe I could do more with my life,” she says. “So I chose to do more than just survive.”

One decision Anthony made was to end her first marriage, which had not been a happy one. Two years later, she married her “old high school crush,” who she had reconnected with on social media. The two of them decided to start a new life together in Texas. They chose Temple because Anthony had a friend who was a Temple College graduate.

After they settled in Texas, Anthony says her new husband encouraged her to go back to school.

“He told me many things can be taken away, but nobody can ever steal your education,” Anthony recalls. She also had discovered that without a degree, her prospects for a good-paying job in the Temple area were limited.

Anthony enrolled in Temple College in fall 2017. Her first semester, she crammed in as much as she could, taking 19 credit hours.

“I just wanted to pass my classes to get a degree,” Anthony says.

But not only did she pass her classes, she did well enough to receive an invitation to join Phi Theta Kappa (PTK), the honor society for students attending two-year colleges.

“I almost ignored the invitation to join because I didn’t want to spend the money,” Anthony says.

Her husband also convinced Anthony to join PTK. It turned out to be a life-changing decision for her and a decision that would have a major impact on Temple College.

Anthony says when she went to her first PTK meeting, she wasn’t sure she wanted to stick with it. But at the next meeting she attended, they were looking for new officers.

“I told myself if I was going to be part of this group, I am going to give it my all,” Anthony says. She became the chapter treasurer in February 2019 – a position that meshed well with her accounting studies. Then she was elected chapter president in August 2019.

When Anthony joined the Temple College chapter of PTK, it was only designated as a One-Star Chapter – the lowest possible ranking a PTK chapter can have. Anthony made it her personal goal to get the chapter to Five-Star status – the highest possible ranking.

In order to be recognized as a Five-Star Chapter, PTK groups must complete a series of activities that increase their presence on campus and within the PTK organization. They also need to develop a College Project and an Honors in Action Project that combines academic research with action.

For their College Project, the chapter started a garden on campus in conjunction with the Bell County Master Gardeners. The garden provides fresh produce for the college’s Leopard Pantry.

For their Honors in Action Project, the chapter worked on the issue of zebra mussels that have invaded Central Texas lakes. They wrote a research paper, held an information session on the topic, and spent a week distributing information to students about how they can help prevent the spread of mussels to other lakes.

In January 2020, the chapter finished submitting all the paperwork to become a Five-Star Chapter – an honor that has been earned by only 36.5% of the 1,285 PTK chapters in the country.

“We knew with our hard work that we obtained a Five-Star ranking,” Anthony says. 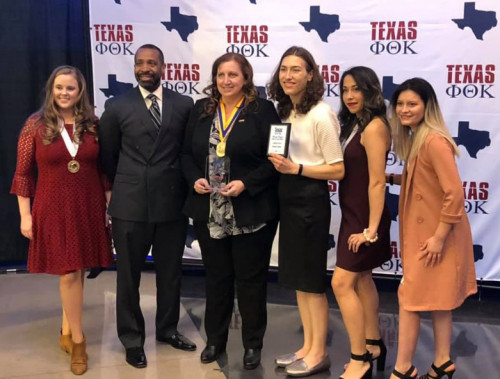 Theresa Anthony (center) poses with other members of the Temple College PTK chapter after the chapter earned the award for Most Improved Chapter in Texas in 2020. Anthony served as president of the chapter in 2019-2020.Other PTK chapters in Texas took note of the transformation at Temple College. At the Texas Regional meeting in March, the chapter earned two statewide awards – Most Improved Chapter and the College Project Merit Award for their garden project.

At that same meeting, Anthony was inducted into the Texas Regional Hall of Honor for Outstanding Officers and also was elected to represent the chapter as Vice President of Texas Region District V.

Anthony says her goal now is to inspire others who may have thought they could never achieve something greater and to remind others of their own self-worth.

“When I look back at where I came from and the growth I achieved in PTK, it is night and day,” she says. “Thank goodness I was convinced to join because I would have missed out on so many great opportunities.”

Anthony’s academic record at Temple College and her leadership in PTK helped her earn a prestigious scholarship from the Texas A&M University-Central Texas Foundation called the Warrior Corps Merit Scholarship. Only one to three students a year are selected to receive the scholarship, which will cover all her tuition and fees at TAMU-CT until she graduates.

“I was beyond ecstatic when I found out that I received the Warrior Corps Merit Scholarship because I had never expected to receive such an honor,” Anthony says. “If it had not been for Phi Theta Kappa, I would never have applied for any scholarship at all because I did not think I would qualify. As a member of PTK I knew I would qualify for a PTK Transfer Scholarship, but I got so much more. I would not be where I am now without this amazing organization.”